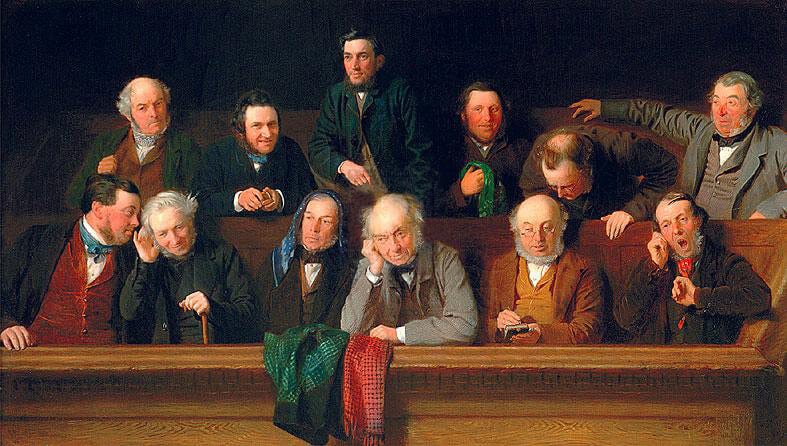 Currently lawyers in the George Zimmerman murder trial of Trayvon Martin are picking a jury. In reality, lawyers don’t really “pick” a jury, so much as exclude those who express actual opinions.

The process is known as “voir dire” and if you’ve never been called for jury duty, lawyers from both sides lob questions to the panel of potential jurors sitting in front of them to try to root out some information that would determine how that panelist thinks.

So, for instance, a lawyer might ask: “Who here knows someone who was in a car crash, sustained injuries and made a claim for damages?” Of the 12 panelists, #1, #4 and #6 raise their hands.   “Of you three, what did you think of that injury claim?”

Panelist #1 said: “It was my sister who was really injured and I supported her all the way. She was out of work, had bills and needed the settlement. I wish she had gotten more. It was a real interruption to her life.”

Panelist #4 said: “A co-worker got a big settlement and I happen to know there’s nothing wrong with him! This is what’s wrong with our country – all these bogus injury claims.”

As a personal injury plaintiff’s attorney, I like panelist #1 who seems sympathetic to injured people, and I guarantee the insurance defense attorney likes panelist #4 who seems to think all claimants are crooks. Guess what will most likely happen? I will ask the judge to strike #4, opposing counsel will ask to strike #1 and we’ll end up with milquetoast, non-descript panelist #6.

Strong opinions one way or another generally lead attorneys to stereotype that panelist as “biased”. We lawyers can either strike a juror “for cause” (for instance, a panelist says: “I think all personal injury lawyers are crooks!”) or use a limited amount of peremptory challenges when a lawyer can toss a juror for any reason whatsoever.

So, the resulting panel of those sworn in as jurors are a group of people without any obvious biases, but who are generally a bunch of blank slates. This is why lawyers in high profile cases use a Jury Selection Expert. If we can’t determine any obvious verbal biases, an Expert might help us with more subtleties. These Jury Selection Experts are often psychologists or sociologists who are pros in reading people.

Body language is a big factor in jury selection: Does the juror react more positively to one side rather than the other, or do they fold their arms, sink into the chair and stare at the ceiling? Not a good sign.

Also, for better or worse Experts generally rely upon some stereotypes as a starting point in evaluating a potential juror. The most basic stereotype is some minorities relate more to the plaintiff, the everyday Joe, than the defendant, especially if the defendant is a corporation or insurance company. Yet very educated people tend to be more conservative and might relate on a more cerebral level to the corporation than an emotional, and hence, irrational plaintiff.

But generalities sometimes fail completely. I had a potential juror who was a pharmacist and a member of a racial minority. Would he react more like a professional given his years of education or would he follow the other stereotype? Ultimately, we bumped him.

Essentially, Jury Selection Experts are experts in guesswork – and some are better than others. Don’t get me wrong: the most important thing in a courtroom is to have a good client and a good case. But getting a handle on a favorable jury is really invaluable.