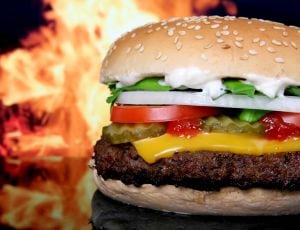 Food poisoning cases don’t come around very often to a personal injury lawyer mainly because it is extremely difficult to pinpoint what exactly made you sick or even which meal you ate that day that contained the contaminated food. Was it something you ate from breakfast, lunch or dinner?

However, as an injury attorney I have had some undisputed food poisoning cases:  I’ll share one and you’ll see what I mean.

My client was in his early 20s and he owned a car detailing business. His job allowed him to make his own hours and on this particular day he slept in until about lunchtime. He hadn’t eaten since the night before, was a bit hungry when he finally awoke but he wanted to get a job out of the way. This particular job consisted of washing and drying a fleet of cars that took him a few hours to complete.

By the time he was done it was mid-afternoon, “Jerry” hadn’t eaten since the day before and he was famished. He stopped by a well-recognized hamburger fast food chain for take-out. Despite being so hungry, he got about halfway through the super-jumbo-mega-colossal triple cheeseburger and it tasted………. kinda weird. He wrapped the rest back up, threw it in the bag and tossed it in the seat next to him.

Going about his day, within two hours or so, his stomach started to churn. Minutes thereafter, Jerry decided to skip the next car wash and return home. He had just started to feel bad. His stomach hurt, he had a horrible headache and he was becoming nauseous.

No sooner home, he headed straight for the bathroom. I’ll spare you the details. Suffice it to say that over time Jerry became so sick, his girlfriend and his roommate stripped him bare, picked him up and placed him in the bathtub to contain the degree of………let’s just call it, a multidirectional mess.

Jerry was so ill his girlfriend was fearful for his general health and she called 911, which was the exact right thing to do. The paramedics came, heard what had happened and even preserved some of the “mess” knowing that diagnostics of the contents would reveal what made him so unbelievably sick.

Despite his degree of nausea, Jerry was aware enough to alert the paramedics to the uneaten portion of the hamburger which was still in his truck on the seat. That was scooped up as well.

Off to the emergency room went Jerry, who remained hospitalized for two days for extreme dehydration and food poisoning. The samples were sent off to the County’s epidemiologist who confirmed contamination of the meat from this fast food restaurant (which, to this day I cannot bring myself to frequent) and then reported that back to the County for an immediate inspection of this fast food joint.

The two things Jerry had going for him in this nauseating predicament was, we knew exactly what meal made him sick. It wasn’t as if he had breakfast at this donut shop and lunch at that diner; he only had one meal that day and it was a fast food burger.

Now the other fortunate thing for Jerry was where most people err in food poisoning cases. As fast as that meal that went down is coming back up, most people flush the evidence away. Your body is rejecting that food for a reason and the evidence lies in the *mess*. Jerry not only had someone preserve the bodily evidence, he also kept the offending food. This made my job, as an attorney, much easier to prove causation.

Jerry’s legal case consisted of the bills associated with a two day hospital stay since he had no health insurance, the loss of income for missing ten days of work and a reasonable demand for the temporary pain and suffering he went through.  Getting food poisoning is about as sick as one can get, however, it rarely leaves any permanent medical condition. A good personal injury attorney is usually necessary for a reasonable valuation of a case like this. Fortunately, we were able to resolve Jerry’s claim somewhat quickly, but as Jerry said: “Absolutely no amount of money is worth what I went through.”