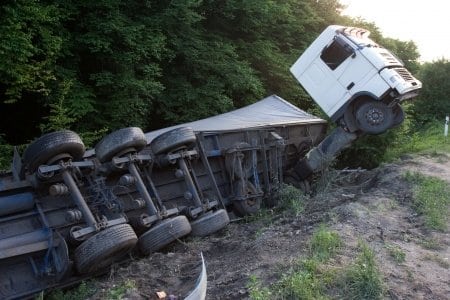 Imagine driving an 18 wheeler pulling a tankful of pool chemicals on I-75 southbound to Miami. It’s 3 a.m. because you hate driving in daytime traffic, and if you timed it right, you’ll arrive in Miami at dawn. Of course, it’s dark except for the street lights disbursed along the highway – and traffic is very light given the hour. As you approach a lane merging onto 75 near Ft. Myers, you see the vague outline of……..is that a mini-van without its lights on?

In that instant, you recognize that the mini-van not only has its lights off, it’s not moving. It’s at a dead stop. A wave of panic unravels over you: Traveling at 65 mph you realize in that instant that you’re in the same lane as the mini-van and you have no time to change lanes or you’ll flip this rig with toxic chemicals. You also have no chance of stopping in time. A collision of grave proportions is probable as your last thought turns to your lovely wife and 2 kids at home.

This was the situation faced by the most favorite client I never met. I never met Dmitri because he was, in fact, killed at the accident site. I wish I got to meet Dmitri because everybody loved him – his wife and kids, his neighbors and his co-workers. He was a big, fun-loving, gregarious Ukrainian-born man  who would give you the shirt off of his back – and with a broad smile. He was so proud to have become a naturalized US citizen. He was truly living the American dream.

The mechanics of what happened to Dmitri right after the recognition of the inevitable crash were horrific.  With 3,200 gallons of liquid chlorine propelling this cab forward, he did try to steer the rig to the left to avoid impact with the mini-van. It didn’t work. This truck smashed into the rear of the van crushing it, the right wheels of the truck began to roll over the smaller vehicle, and Dmitri, thinking his only chance of survival was to get out of the tipping truck, took his seat belt off and he tried to jump off the cab away from the truck.

Instead, the truck rolled over him killing him instantly. Dmitri had just celebrated his 25th wedding anniversary with his wife and was days away from having a surprise 45th birthday party thrown for him. He was found crushed on the side of the road with his truck further down the embankment.

So, why in the world was there a stopped mini-van in the slow lane of I-75 at 3 a.m.? Was it abandoned? Did it have a driver? Yes, it did have a driver and now she was dead too. The tractor trailer essentially rolled right over her killing her instantly as well.

It was not easy to piece together a catastrophic collision scene since both parties perished as a result and there were no witnesses.

But here’s what we know: Days earlier a 16-year-old girl who lived in the vicinity had just gotten her learner’s permit. Since it was summertime and kids were out of school, this young woman with a rebellious streak decided to basically hijack her mother’s car in the middle of the night and drive to her friend’s house. The quickest way to get there was to get on I-75 and drive a couple of exits.

So now we knew the identity of the second victim of this collision was a 16-year-old incoming high school junior. Dead at 16.

Okay, the scene is becoming a little clearer – we now know who and how, but why? Why would she be sitting in her mother’s car stopped on a major interstate with the lights off? Here’s what we also know: she had “jacked” her mother’s car on one other occasion also in the middle of the night and took a selfie video of herself in the process of driving around town and sent it on Snapchat to friends.  At the time of this incident, was she taking selfies in a stopped vehicle to make it easier to send to friends? We don’t know, but it is a reasonable inference. It seems that this young woman might have enjoyed dangerous adrenalin thrills. This time it cost two people their lives.

I was hired as the family’s personal injury attorney and I immediately recognized the problem with damages: His widow’s exclusive remedy was death benefits through Workers Compensation. This amounted to a weekly amount payable over some years. It wasn’t lump sum. After losing her husband, the primary breadwinner, and love of her life, Maria would have to make due with benefits insufficient to even cover her monthly mortgage and other recurring expenses. Maria’s emotional loss was overwhelming, but how was she going to financially survive with two children and a big house?

Could a claim be made against the at-fault driver? Yes, of course. This terrible loss should account for a huge financial claim for the wrongful death of Dmitri – loss of future income alone would account for well over a million dollars, not to mention the pain and suffering inflicted on the widow for the loss of her husband. However, the at-fault driver was a 16-year-old with no assets. What about car insurance?

After determining there was only a minimum policy of car insurance in place and that the 16-year-old had no assets of her own, the next question – did her Mom have any significant assets to help compensate our widow for her terrible financial loss? After all, a Mom is responsible for the negligent actions of a 16-year-old when she co-signs the learner’s permit for her minor daughter – it’s a bit like co-signing a loan. After a thorough asset check, no, the teen’s Mom, a single mother, had no assets either.

Hmm, everywhere I looked there were dead ends on how to find a way to compensate Maria to help her through the financial high waters that lay ahead.

Then I had a thought: While this young woman was grossly negligent for essentially sitting, stopped in traffic with deadly results, was there any fault on Dmitri’s shoulders? Did he do anything wrong? It was hard to conceive but I could see a crafty attorney making the claim that if Dmitri were in better control of his tractor-trailer he would have been able to swerve to avoid this impact entirely. Therefore, Dmitri had a degree of comparative negligence on him that could allow a jury to reward damages to the dead girl’s mother.

With that in mind, I wondered aloud if the mother of this young woman might actually make a wrongful death claim on behalf of her deceased daughter, against this multi-national billion dollar truck company that employed Dmitri. Certainly, the insurance was there and even if a jury found Dmitri only 10% at fault, that could still translate into a lot of money for this girl’s mother. Potentially millions – what is the life of a deceased minor worth? Someone who will never attend her prom, go to college, get a job………get married and have children.

After digging through court records, I was able to determine that this woman was, in fact, going to make a claim against this trucking company for the incident. It didn’t seem right that the mother of this young woman who made a horrible mistake that fateful night would reap financial benefit from my client’s own employer when my widow would be struggling financially for the rest of her life.  However, now we had an “in”.

A legal action was soon filed against the mother of this young woman not based on her current assets, but expectations of assets she will have in the very near future based on the loss of her daughter. We attached our legal claim onto hers so any benefit coming to the mother would have to be dealt with at the same time. After learning that this mother had very aggressive and rather nasty lawyers from South Florida, I teamed up with an exceptional lawyer I know and we fought these guys every step of the way.

From here some of the legal wranglings got complicated. My law partner and I had an all-day mediation, in this case, to settle it with the other nasty lawyers representing the Mom.  The conference room looked like the cast from any crime-drama TV show – we had about 8 lawyers for various parties, risk managers, insurance adjusters, auditors, life care analysis specialist, an insurance agents who specialized in annuities (for investment purpose) and, of course, two women who had lost just about everything in life with the loss of their husband and daughter.

Sometimes what seems impossible to resolve because of professional egos and legal complexities can become a reality when the ultimate parties involved – two grieving women – demand a simple resolution. While neither woman wanted to get to know the other, they had one thing in common: A desire to get some closure so they could move on with life. We also had an insurance company on behalf of a billion dollar trucking company that also knew to keep this hot-bed case away from a jury.

After hours of financial wrangling, many client tears and the determination to bring this to a resolution, a settlement was reached – both for the mother of the dead teen and for my client – the widow. Because of confidentialities of the parties, details of the settlement cannot be divulged, of course. But the cases did settle on that date for a very significant amount of money.

Driving home from Ft. Myers I remember feeling proud that I was able to be crafty enough to create an income stream for my client that really didn’t exist except through an alternative pathway, and we actually pulled it off. But I also knew that no amount of money for my client would ever make her whole. No client has ever settled a case and thought, “well, that was worth it.” Still, we were able to make her life without Dmitri a little easier without having to worry about finances.