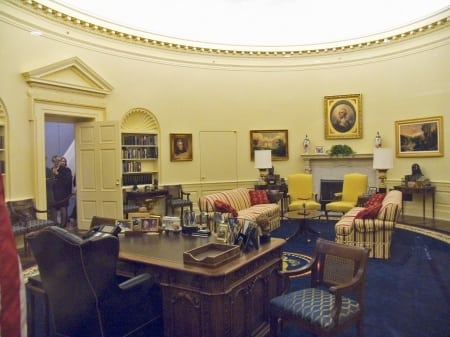 Most Americans are overall generous with their good thoughts about past presidents. Sometimes we mindfully embellish a so-so president to larger than life status. You can name your own example, but as time goes on we begin to burnish that reputation to a higher sheen, especially as we watch that retired president grow old and seemingly wiser, with age.  I think most people even came to terms with Richard Nixon towards the end as we mentally shaved off some of those harsh edges of the Watergate years.

My current thoughts go to President George Herbert Walker Bush, or “Bush 41”, currently the subject of a new biography by John Meacham. President Bush was of my father’s generation, he also served in WWII like Dad, he enjoyed a very long and distinguished career in public service and, frankly, was a pretty good president. He certainly knew when to invade and pull out of the Middle East with a very defined and modest goal of getting Iraq out of Kuwait with little to no bloodshed.

Through it all, he has remained a very modest and humble man who can bring own his grown sons, George and Jeb, to tears just retelling stores of their Dad growing up.

Recently, I’ve been thinking about a Bush story from years ago that rings very true for me:  Looking at his growing children getting ready to go off to college, he advised that that if they decided to venture into a life of public service, it’s a very noble calling, but “make your fortune before you make your mark in politics.” It’s what Bush’s father had done and what Bush 41 had done.
Why? Because a life in politics does not and should not bring individual wealth.  The salary of a DC congressman isn’t a fortune when you factor in the need for two residences, one of which is in one of the most expensive places in the US. Those with younger families have a financial drain back home with private school and a mortgage and every other incidental expense. Realistically there is no other way to earn additional income unless your spouse works.

The perks and privileges afforded to congressmen  and women in DC is, I’m sure, intoxicating. Politics is power. These legislators are routinely working with the most powerful world leaders and many of the richest people on the planet who might be looking to exploit the congressman’s power. Such attention is no doubt exhilarating. The difference lies at the end of the day: When the world leaders go back to their suite at the Four Seasons, many of these DC politicians are going back to their congressional office where they sleep on a cot in the corner rather than spring for an expensive DC flat.

To say money is a corrupting influence in Washington is beyond trite. Money is the root of all evil in politics. Period.

However, I do truly believe that people like George W. Bush and Jeb Bush, both of whom struck it rich before running for any office, have the best antidote for the infection of corruption – personal wealth. They both listened to Dad. Nevermind that they both traded in on the Bush family name and helped themselves to family connections in this quest for wealth. Their careers in politics may be checkered, but I’ve never doubted their sincerity and dedication to public service.

Then there’s the case of Senator Marco Rubio of Florida. He may be running for the biggest job in the land with the largest economy but as far as we can tell, his finances are a mess. He basically admitted to rookie bookkeeping mistakes in his autobiography.  Last year he had to cash in an IRA with a huge tax penalty to buy, among other things, a refrigerator. He received a large cash advance from a book and, this man with four young children, immediately went out and bought a big boat.

When he was in the Florida Senate not long ago he was entrusted with a business GOP Party credit card that he routinely used for personal expenses until he was questioned about each entry such as personal travel, paving his driveway, fixing his mini-van. His explanation was always, “oh, that was my mistake” like the child hoping not to get caught with his hand in the cookie jar.

And this is just what we currently know. The contrast couldn’t be more absurd between self-made politicians and those who might be looking at politics as the means to an end. The list of politicians who allowed themselves to become corrupt and sell their influence is too numerous to list. I think the Illinois penitentiary is currently occupied by three former governors who learned this lesson the hard way.

A life in politics is a way to give back to a country that has provided so much opportunity. It should not be seen as a means and method of personal enrichment. Personal wealth should not be the main criteria in evaluating a candidate’s merits for the job, but it is one way to ensure that he or she isn’t subjecting themselves to claims of corruption or putting the office up for sale.