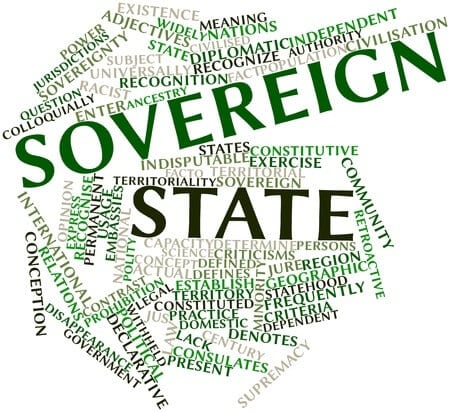 The word “sovereign” means : “a chief ruler with supreme power,” like a King or Queen or even a fiefdom run by a master.

Back in the middle-ages when the world was largely run by sovereigns whether royalty or a chief ruler, one couldn’t sue the master. As the saying went, “rex non potest peccare”, or the king can do no wrong.

So, if you couldn’t sue your sovereign, he or she had complete immunity. Royalty could rain down any number of nasties on you and you, as a subject of the sovereign, had no recourse at all.

History being what it is, this didn’t sit right with the public and was the subject of a lanumber of civil wars between the subjects who were abused, killed, pillaged and plundered by royals who were constantly blood thirsty for money (taxes) to pay for wars. Think French Revolution or even the American Revolution.

Over time, the crown relented and allowed subjects to sue the state when the state had abused power and that abuse damaged or injured someone. This was not only fair, it prevented more civil wars and civil unrest. However, the sovereign’s grip was only slightly lessened: You could sue the state, but only for smaller amounts of damages, with shorter statutes of limitations.

Today, even though the sovereigns are long gone, the concept remains. Whether on a federal level or a state level, any constituent can sue the government, but your rights are limited. Damages are capped (here in Florida currently at $200,000), as are attorney’s fees (limited to 25% rather than 33% or 40%) and there is a shortened statute of limitations.

Some people are shocked to hear how far the tentacles of sovereign immunity can reach in our country. Did you know that if you’re the victim of medical malpractice and your doctor works at a teaching hospital run by a state university, your claim is limited to sovereign immunity? Your physician is essentially a deputy of the University system run by Florida. This is important because often those who suffered injuries from medical malpractice have catastrophically high injuries and the immunity limits are often insufficient to fully compensate the victim.

Those people wrongly incarcerated for crimes they didn’t commit who are eventually exonerated 20 or even 30 years later are entitled to millions of dollars in damages for a life lost, but, if the State legislature doesn’t waive immunity, they get nothing.

If you think none of this might happen to you, just imagine being badly hurt after a County truck broadsides your car. You will be subject to the rules and limits of sovereign immunity.