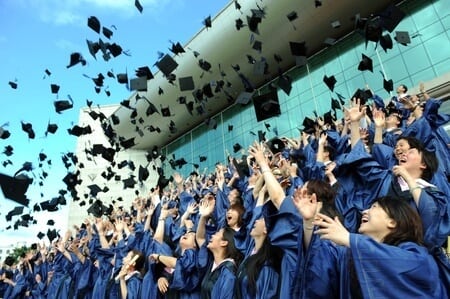 Congratulations High School Grads! Every year around now I think of a creative way I helped out a client in a unique way that was both satisfying and fun…

“Kate” was a single mother of twin girls and she pretty much lived for these girls. She sacrificed just about everything to give them all the privileges that weren’t afforded to her as a mother on welfare. The most important priority for Kate was their education and it paid off. Each girl was talented enough to get into a magnet program here in North Pinellas. But they went to different schools since each had a different scholastic talent.

Each twin excelled at high school and as graduation approached, both were graduating very high up in their respective class. Kate was beyond proud of these girls and she had every right to be. Graduation would be a really exciting time for all three of them. For 18 years it was Kate and her girls against the world, and they won.

Before Kate ever called me, she called the principal at each school to see if either girl could graduate out of turn to let their frantic Mom make a 45 minute trip after one daughter graduated to see the other one also get her diploma.

Basically Kate was told that no exceptions can be made for graduation – they each had to get their diploma “in turn” and if they made the exception for Kate they’d have to make exceptions for dozens of other parents who wanted, for whatever reason, to change “the rules”.  Kate even contacted the Pinellas County School Board who punted the issue back to the local level, which was no solution at all.

So, with this Hobson’s Choice, Kate decided if she couldn’t see both graduate, maybe she should choose not to go to either graduation ceremony. It wouldn’t be fair to see one get her diploma without seeing the other.  It was a really agonizing process for Kate and her daughters actually felt guilty for putting this on their Mom.

Kate called me with without much time to spare before graduation.

But legally what could I do?  There was no time to file any litigation and what would that litigation even look like?

It dawned on me when an issue falls between the cracks of law and equity and it looks like there’s no justice for a client, there’s a third solution: get the media involved. This was a gut-wrenching human interest story for parents everywhere and I thought it might just have enough cache to attract the attention of a local reporter.

So I contacted the only St. Pete Times reporter I knew and he took it and immediately ran with it. Within two days this was a front page story on the Times with a photo of Kate standing between her twins and their story for all to see.

Proving the power of the media, on graduation day Lelah graduated with her class who was accelerated to the front of the graduation line. The School Board caved into the media pressure and moved her to accommodate her twin’s graduation.  By then the story was well known and the auditorium broke out in applause as she received her diploma.

Thanks to the generosity of a local businessman who was touched by this story, mother and daughter  were flown by helicopter from Ruth Eckerd Hall to downtown St. Petersburg where they arrived in time to catch a donated stretch limousine and taken to Bayfront Arena to see Nichole graduate. An elegant graduation dinner was also donated and the three of them, united on this most important date in all their lives, celebrated their accomplishments and their future.

All I did was listen to my client, think outside the box and make one phone call.  However, it was one phone call that ultimately altered the lives of three people on one important day.