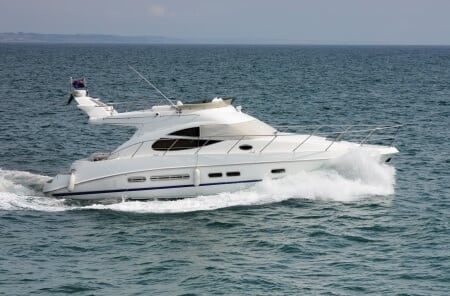 It’s not every day in an injury lawyer’s career that he is gifted with such a perfect, but gasp-inducing case. I’ve had a number of vessel crash cases in my office over the years, but they all paled in comparison to the case of “Alice and Mel Jones”. The names and identifiable specifics have been changed even though my clients have agreed to this article, but the incident and the injuries are all factual.

The Joneses are early retirees in their 60s. Mel is now legally blind and Alice recently let her sons take over the family business so they could fully retire. They lived comfortably in a beachside condo and enjoy the Gulf every free moment they have – and they’re very busy retirees. While they don’t own a boat because of Mel’s sight difficulties, they have great friends who own not a boat, but a yacht.

Last Memorial Day Weekend, the four friends cruised down the coast to Sarasota and were staying at a luxury resort. In addition to the four of them, Mel’s service dog, Joker, a beautiful 75 lb. golden retriever also came for the sail. At the end of the long weekend they decided to head home a bit early since the weatherman said it might turn rainy.

The vessel owner, “George”, was captaining the yacht. Trying to beat some bad weather he steered this huge boat through a narrow channel at about 25 knots, which is very fast for a larger vessel going through a narrow, sandy area. Most cruise ships sailing through the Gulf cruise at around 20 knots.

At the same time as he was navigating this yacht, George continued to socialize with his guests who were all seated mid-vessel.

Unfortunately, George mistook an incoming channel marker as his to head starboard. In no time he grounded the yacht. In a split second this vessel went from 25 knots to 0 knots.

Alice had been the only one sitting facing the front of the boat with Joker at her feet when it was grounded. Being a small woman, Alice essentially became a projectile. She was catapulted about 20 feet through the air. She began to descend in the exact location of the galley entrance – she basically “threaded the needle” and then fell down into the galley.

What broke Alice’s fall was a teak step that led to the bunk in the aft of the vessel. The top of her head hit the step, but with the ongoing momentum of her fall her scalp was essentially ripped from the top of her head, back to her ears as her skull continued to move forward and downward. If you were to pull a hood from the top of your head back to your ears, that’s what happened to Alice’s scalp. Medically speaking, her scalp was “de-gloved”.

A split second after she came to a rest on the yacht’s floor, Joker the service dog, also came flying through the air and landed right on Alice’s chest, breaking most of her ribs and bruising her lungs.

The most critical wound at that time was her scalp. Scalps are incredibly vascular, meaning we have thousands of veins coursing with blood in our heads. As you can imagine, this was a bloody mess that looked like a crime scene.  Alice, who never lost consciousness, kept repeating to her husband and friends, “Am I dreaming this? Is this real?” Clearly she was in shock.

Some luck was on Alice and Mel’s side as this incident happened within sight of a Coast Guard station and the County’s only trauma center was a very short distance away.

At the hospital, Alice was rushed into surgery and her scalp was reattached and stapled together. She ultimately required five blood transfusions to replace what was lost after the injury and trip to the hospital. Her surgeon told Mel that she was minutes from “bleeding out” where the blood loss is so massive, the heart simply stops beating. Death quickly ensues after that.

When all was said and done, Alice sustained nineteen broken and fractured bones, a closed head injury, lung damage and a significant spinal deformity. The mechanics of her injury is similar to taking someone from a second story roof by their feet and dropping them on their head. She was in ICU for 10 days and the hospital main unit for another 15 days. Her medical bills hovered around $400,000.

The impact of the fall also crushed a number of her vertebrae and Alice now stands almost two inches shorter than she did before this incident. Because of the area of her spinal crush, she also now has a humpback that is irreversible.

While Mel is a very able disabled man with the help of Joker, as you can imagine he relied on Alice for certain assistance. Now Alice was completely disabled as she recuperated and was totally reliant upon Mel. They had to rely on friends to drive them everywhere.

Alice and Mel were avid members of their country club and despite Alice’s age, she’s always been thought to be 10 to 15 years younger than her actual age. Her younger appearance is enhanced by her extensive wardrobe which extends throughout just about every closet of their condo. Now her clothes do not fit, are too long due to height loss or accentuate her “hump back”.  She suffers from what is called “situational depression.”

After eight months of active recovery, Alice has done remarkably well. Her recuperation is a testament to her physical health at the time – she was in very good shape. Almost miraculously she has no brain deficiencies. She still has many permanent health issues but nothing that she isn’t working hard to minimize. However, she will have medical bills and therapy bills for years to come.

As a legal claim, we rapidly made a demand on both the underlying vessel liability insurance policy and just as rapidly receive the full limits of liability given the severity of injuries and the negligence of the yacht captain. Shortly thereafter, we settled with the umbrella carrier for several hundred thousand dollars more.

The settlement was quick and just. While a lawsuit could have been filed to squeeze a bit more money out of the umbrella carrier, it would have drawn out the process for my clients who were desperate to focus on recuperation and healing, not litigation and reliving this event which plagues my client’s dreams to this day. Their financial future is now set and they can work on repairing their lives.

Alice has heard many times how “lucky” she is to be alive, and while she is thankful to have made the recovery that she has made, in no way does she feel lucky. And although I’ve never had a client who would trade their physical health for a large settlement check, we played the cards Alice was dealt to the best of our ability.

By the way, Joker the service dog suffered from a fractured paw, but I’m happy to report he is doing just fine and is back at work with Mel.

Author Bio: Walt Blenner is a Palm Harbor attorney  who is an “AV” (highest) rated by Lawyers.com and Martindale Hubbell. He has successfully represented hundreds of clients in Palm Harbor, Dunedin, New Port Richey as well as Tampa and looks forward to helping you and your family whether in the area of personal injury, estate planning or corporate representation.
You can follow Walt on Twitter (https://twitter.com/waltwb), Facebook (https://www.facebook.com/BlennerLawGroup)