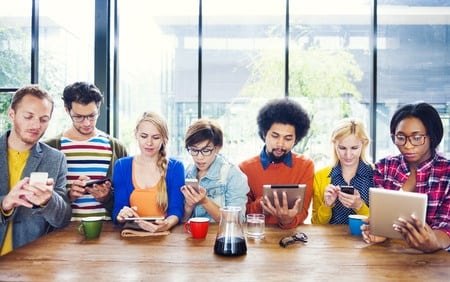 The inventor was Dean Kamen, and the invention turned out to be the Segway. Don’t you own one? Yeah, it was an overall dud unless you give city tours to groups of strangers in helmets. The Segway was a victim of complete over-hype and of limited utility to those who don’t live in urban areas.

But there is an invention that has changed everyone’s lives over time- It’s the internet. Those 40 years of age and younger don’t recall a day without it. Those of us who remember the Draconian times when we had to actually walk to a library for research, go to the store to purchase an item or pick up the phone to call someone now don’t know how we lived without it.

But one downside of the internet is the anonymity of it. The lack of human interaction – one can send an e-mail or order anything from a can of soup to an entire car online, without uttering a word. Almost anything can be done with an internet connection and a simple computer. Life has become in one way easier, but in another way, it can be a lonely, unspoken existence.

The fewer interactions we have with others, the more disconnected we can become and with that sometimes comes incivility. It’s much easier to “yell” via e-mail at some nameless service person who may be sitting in your town or typing from India than it is to be rude to someone when you face to face with that same person. These e-insults are very unproductive – consumer anger can be met with corporate indifference and then it becomes a stalemate.

When it all hits the fan is when we get called. All lawyers have received calls from clients complaining about the bad service they’ve received from someone – whether it’s in their home, their car, or their professional’s office. Largely, it’s a function of bad or miscommunications. When the bad service has amounted to the loss of a large amount of money, a lawyer is essential to advocate the client’s rights and try to get that money back through negotiations or litigation.

However, when the sum of money that the service person charged is modest, it usually isn’t economically feasible to hire a lawyer. It’s what I call ‘falling between the cracks of law and equity’ – you know you were wronged, but to get justice on your matter may just be throwing good money after bad and small claims court just seems like a waste of time.

Can’t get back that $312 for the failed car repair at the local mechanic’s garage? Disgruntled clients can trash them – and sometimes anonymously, which really lets the hounds of hell loose on the keyboard. When there are no consequences for expressing your vitriol the hyperbole can get turned up a few notches. And the CAPITAL LETTERS and exclamation marks (!!!!!) start flying.

As a lawyer, I’ve seen both sides of this from clients – from the aggrieved client who just wants her money back and is met with a company that will not do the right thing, to a client with an agent who is being blackmailed with a bad review unless they buckle to waiving fees on last minute transactions.

It is subject to abuses on both sides of the aisle. Many times when clients can hire me to try to find a rational, reasoned solution, they’ll take the quick route which doesn’t cost them any money. Why pay attorney’s fees to work out a solution for that bad manicure or that crummy paint job on the house or that computer IT guy who couldn’t debug your computer? “I can complain to the entire social media community, trash this guy, ruin his day, his month, or even his business.”

And I’ll tell you why this isn’t a panacea for all consumer complaints – because sometimes that service company or that handyman has a defense. Standing on an e-mountain and screaming foul s often times very patently unfair. There are factual nuances to almost all cases – no case is a study of black and white. There’s an old saying from Texas Congressman Sam Rayburn, “Any a jackass can kick down a barn, but it takes a good carpenter to build one.” Keep this in mind, Keyboard Warrior, when you have the ability to truly hurt a business overnight on social media that has been steadily building a good reputation over time.

For those businesses which is truly awful, an aggregate of negative reviews online which are consistent and span a long time will tell the tale. I’m not here to protect them. But for the other businesses, the smaller businesses which aren’t reviewed dozens of times every month, a bad review can be devastating.

A wedding photographer in Texas spent a decade building up a reputation as a good and reliable professional, and it just took one disgruntled couple to trash her reputation to the point where she no longer had bookings. At all. She had to leave her home and move to another town to start her business all over again. And this dispute was over the small cost of a photo album cover that she eventually agreed to waive. Was that the desired result? To ruin someone’s business? Can people really be that awful?

“But….my First Amendment rights!” Yes, you have those rights. But those rights aren’t unfettered and should start with a good understanding of the law. You do not have the right to post lies – “he’s a convicted felon!”; “I think he’s a child molester, but I haven’t confirmed this”; “He embezzled money from another company”; “I heard he’s got a long history of scamming people out of their life savings”, etc. If these are probably false, you’ve just libeled another through the publication of these allegations. Even some puffery like, “I hear myself and hundreds of her clients think she’s utterly incompetent,” may be actionable if there aren’t “hundreds” of others.

So, remember when we have a legitimate complaint with someone in our lives who have provided less than perfect service: Try to work it out in a non-hostile way, preferably over the phone or in person. If that doesn’t work – we attorneys are here for you to navigate the claim hopefully toward a resolution. A small claim is a possibility. But if you must post a negative experience on social media, make it measured, truthful and defensible.

Making it defensible is most important because you may have to defend it – that couple who trashed the wedding photographer in Texas all over social media is now on the wrong side of a $1.08 million jury verdict for defamation of character. As they say, “Freedom of speech is not freedom from consequences.”