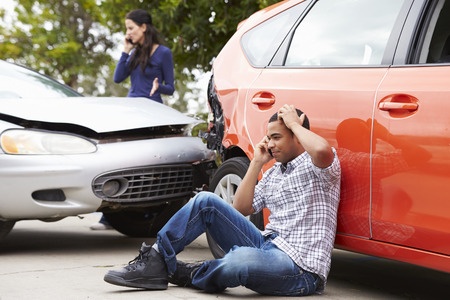 Most of us get it that talking and texting on cell phones is a very bad thing for safety on the road. However, cell phones are fantastic tools to use if you’ve just been in a collision.

Yes, of course people use their phones to dial 911 after they’ve been hit, but that’s not what I mean. The camera component of cell phones is such a good way to “preserve the evidence” as we lawyers term it. Obviously, taking photos of both wrecked cars is a good idea as you sit on the side of the road.

But often people will be instructed to move their cars from the road to allow traffic to flow. If this is the case, take photos of the cars on the road before you move your car. Taking photos of the cars in the intersection can help the police determine who hit whom and where. When some defendant drivers are less than truthful to the investigative agency after the cars have been moved, your photos will help tell the tale.

Also, while you wait for the police to arrive, get all the information you can: Driver’s License number, date of birth, car insurance company information, policy number, the car’s tag (or license plate), the other driver’s phone number, etc. Don’t have a pen or available paper? Again, use the camera feature from your cell phone to simply snap a photo of the tag, license, registration and insurance card. If there’s other information that you need that cannot be captured to a camera – like a cell phone number – there are other features on your phone that will allow you to do this. Put the defendant driver in as a new “contact” on your cell phone list. Call your cell phone and leave yourself a voice mail message with his or her phone numbers.

And the utility of a cell phone camera isn’t limited to car crashes, of course. When people slip and fall, the prevailing emotion is embarrassment – most people get up quickly (if they can) and leave. Bad idea. Chances are the thing you tripped on or slipped on is “transitory”, meaning that it won’t be there long. Once the supermarket is alerted that you fell on a smashed grape in the Produce department, or a puddle of shampoo in Aisle 6, it will be quickly wiped up. There goes your evidence.

The best advice when one falls in a commercial establishment, whether it’s a supermarket, restaurant, big box store or mall, is to report it to someone in charge at the story and snap as many photographs as you can to preserve the condition of the floor as it existed when you fell. Many times stores will have you fill out an “incident report” with your name, address, etc., and how the incident happened. Don’t take the chance that they will give you a copy of this report. Often, they will not. So, take a photo of it before you hand it over.

And, when you get home and settle in and try to assess your injuries, it’s very important to take photos – selfies, if necessary – of that abrasion, that bloody nose or those bruises you sustained. Topical injuries often heal very nicely and quickly. Make sure your best stock-in-trade is preserved as well – you!